Last week I open sourced an Android library called ColorArt, which is a port of the popular OS X library written by the guys over at Panic. It allows you to use a source image to create a themed image/text display, very similar to the effect which is done in iTunes 11.

This morning Google launched a new product called Helpouts, a tool which will connect people with experts for help via a video conference. I was accepted as a Helpout provider a few weeks back, and have been using the product for a little while during the internal beta. I decided to do an Helpout to teach people to write code, which I cleverly named “Coding 101: learn the basics of writing code and building apps”.

For a new app that I’m working on, I wanted to use a ViewPager inside a ScrollView in order to make a simple image carousel. The only problem is, ScrollViews don’t seem to play nicely with horizontally swiping Views. As soon as the user moves their finger even slightly up or down, the ViewPager page change is cancelled, and the page snaps back to the current item. This can lead to an extremely frustrating user experience, because it is difficult for the user to understand why the views won’t swipe. 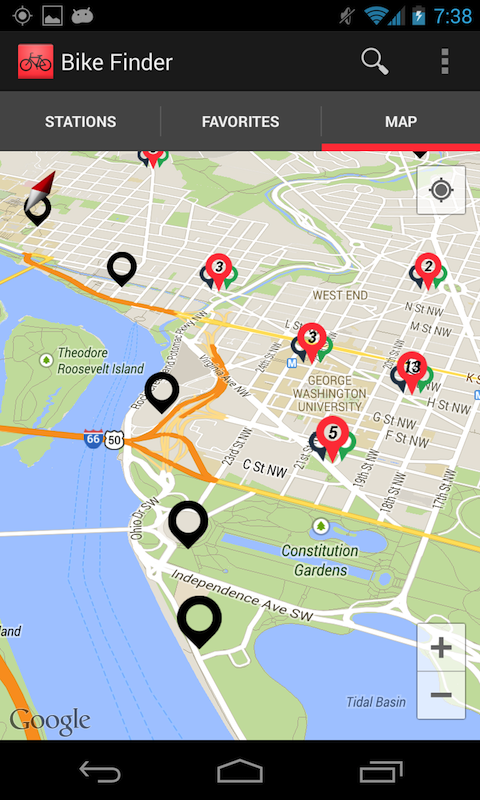 Last week I released my newest Android app, Bike Finder. It’s a fairly straight forward application that allows you to find bikes and stations for use with Washington DC’s Capital Bikeshare system. For those of you not local to DC, Capital Bikeshare is a system that lets you use bikes that are available at docking stations all over the city, as well as parts of northern Virginia. The app is free, and I’m looking into adding additional cities that have companies that make their bike sharing data available (currently investigating New York City, Montreal and the Bay Area). If you’d like to get your city added, let me know, and I’ll see if the data is available, and add it to the to-do list.

Last week I posted a tutorial on how to create a really basic Android To-do list application using Parse. It allowed a user to create tasks, and then toggle their completion status. Then, this information was synced to a server, so that the tasks will be kept up to date on multiple devices. The biggest issue with this app so far, was that there was no concept of users, so all tasks were shared among everyone. This week, we’re going to introduce two new screens (which are very similar to one another), the registration and login screens.

For a while now I’ve been using Parse for small apps, it allows you to iterate quickly and create a backend for an app without too much work. It also seems like a perfect jumping off point for a series of Android tutorials, where we’ll be building a “Todo List” application. (This tutorial assumes that you have Eclipse and the ADT installed already.)

On Monday, Apple announced a new update for it’s desktop operating system, which will be named OS X Mavericks. As part of the annoucement, they touched on a few performance related features, including a new power saving API, which was called App Nap, as well as a memory compression feature, which would allow compress the memory of programs that are not currently active.

According to Ars Technica, Apple is using a technique called Timer Coalescing to create App Nap. Apps that are not active will have their processes set to a lower priority, and therefore use less CPU/disk/etc, and thereby save power. This feature has been around on Linux for a long time, and apparently has been part of Windows as well.

I had not heard, however, of this compressed memory technique, although apparently it had been done many years ago by a program called “RamDoubler”. After some quick Googling, it seems that this is available via a kernel module called “zram”.

So a few weeks back at Google IO, Google handed out an awesome laptop to attendees, the Chromebook Pixel. For those who aren’t familiar with it, the Pixel is a laptop running Google’s ChromeOS, with the highest resolution screen available on a laptop (2560x1700). Unfortunately for me (and owners of the other Chromebooks), there’s a few things you can’t do in Chrome, like writing software in the new Android Studio!

In order to work around this limitation in ChromeOS, a developer at Google named David Schneider developed a set of scripts called crouton. Crouton allows you to run Ubuntu inside a your ChromeOS system, so that you can easily swap back and forth between the operating systems. This is not limited to the Pixel, so if you’re using another model Chromebook, even dating back to the CR-48, this guide should work for you.

Last Wednesday I took the trip up to NYC, to the top floor of Chelsea Market to pick up a device that many have waited anxiously for. A device unlike anything else we’ve seen before: Google’s Glass. This is the Explorer Edition of the device, which is targeted towards developers, who attended Google’s IO conference last year. I was fortunate to be invited to pick up my device on the first day of New York’s pickups, which followed several pickup days in Mountain View the previous week.

If you try using Linkify and LinkMovementMethod, which you’d use on normal links in a TextView, you’ll find that you can no longer use the ListView properly.